This weekend and next week, the Plains is bursting with art, fashion and entertainment.

Native communities in Montana and South Dakota offer impressive art markets, music, and a taste of the Apsaalooke aesthetic. 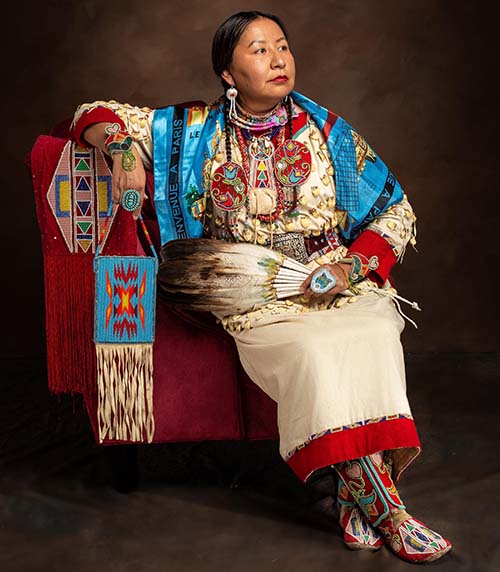 Crow designer and artist Della Bighair Stump of Designs by Della is featured in the Apsáalooke Women and Warriors exhibit, which runs through December 31 at the Museum of the Rockies in Bozeman, MT. (Della Bighair Strain)WHEN: Saturday July 9 and Sunday July 10, 1:35 p.m., 2:35 p.m. and 3:35 p.m.

Designer Della Bighair-Stump of Designs by Della covered Crow culture. She shares her expertise in elk ivories and other aspects of the Apsaalooke style at the Apsaalooke Women and Warriors exhibit.

Bighair-Stump’s Crow couture is on display in the show, and she also gives live Apsaalooke fashion and art presentations in which she discusses how she combines the modern and the traditional in her own work. , shows examples of his creations and explores the nuances. outrageous fashion statements from Crow.

“A lot of people don’t realize how back then our traditional moose tooth dresses were made from real moose ivory and that the moose only had two teeth,” said Bighair- Stump at Native News Online. “If you had a dress full of elk ivories, you were considered rich and your husband was an incredible hunter.”

The live presentations add a candid and personal touch to the exhibit, which debuted at the Field Museum in Chicago, and pays homage to the style, strength, bravery and artistry of the Apsaalooke people through a combination of insignia, contemporary art and historical objects. like shields of war. 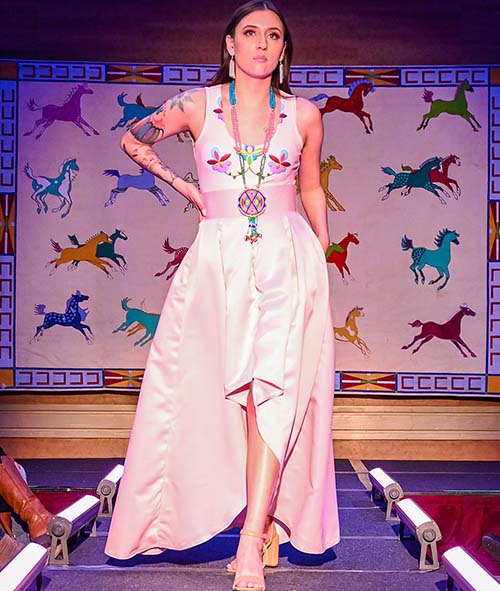 Choke Cherry Creek’s new Spring/Summer Honoring our Mothers collection is packed with Apsaálooke florals and beadwork in the form of ready-to-wear dresses, tops and skirts.

“The collection is dedicated to the mothers and grandmothers who inspired me to bead and sew,” Angela Howe-Parrish, owner of Choke Cherry Creek, told Native News Online. “Each piece is named after my grandmothers Myrtle, Ruby, Annette, Roseann and Inez. I also wanted to pay tribute to my mother Donna and my aunt DeAnn, who were also important and inspired me to start to bead and sew.”

“We are all indigenous designers who have unique styles and have worked very hard to put on an amazing show!” Howe-Parrish said. “There will be a range of unique colorful pieces that showcase our culture in the form of contemporary fashions. Our gorgeous models are ready to rock the runway, so you don’t want to miss it!”

WHEN: Saturday July 9 and Sunday July 10 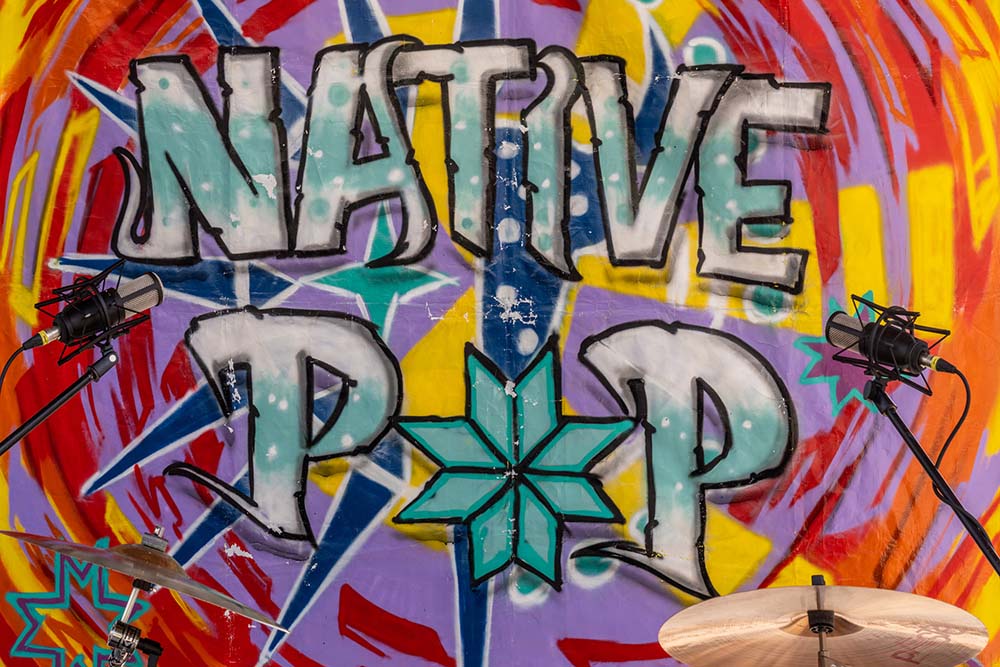 Native Pop returns to the Rapid City stage for a weekend full of art, fashion, entertainment and community involvement.

This year marks the 10th anniversary of the cultural celebration in the heart of the Black Hills, and festivities include an art market, performances by Indigenous artists including The Reddmen, Tiana Spotted Thunder and Arrow Evolution, and a fashion show featuring designers Kayla Lookinghorse, Della Bighair-Stump, Cindy Giago, Jenilee Rooks and Samantha Bissonette.

WHEN: Until Saturday, September 24 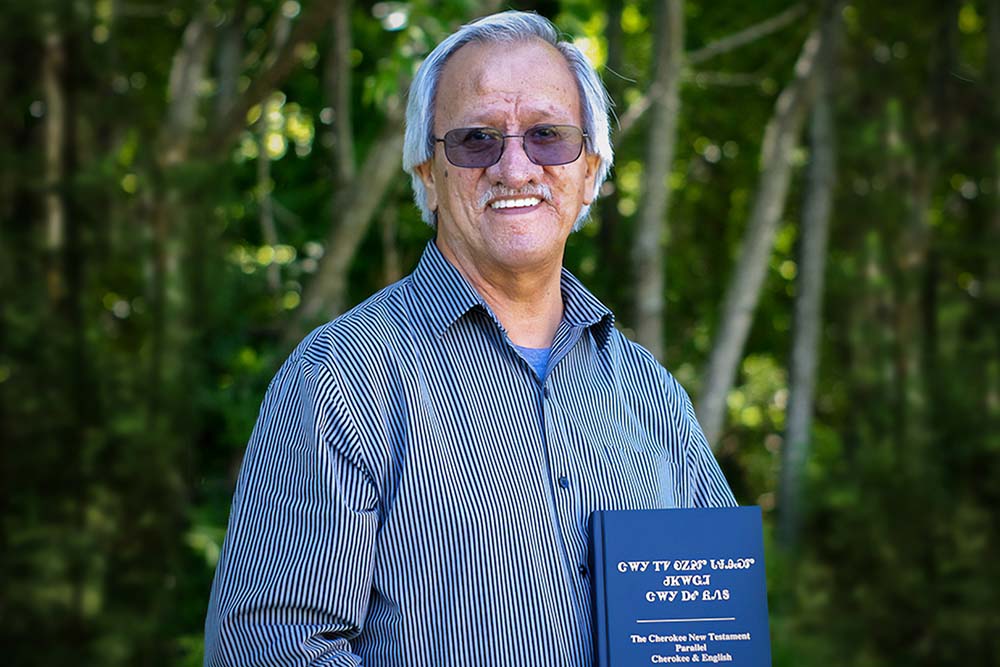 Dennis Sixkiller’s efforts to keep the Cherokee language alive and proudly spoken are the focus of a new exhibit at the Saline Courthouse Museum.

Cherokee First Language Speaker Karen Shade-Lanier has had an immeasurable impact on the preservation of the language. exhibits manager for Cherokee Nation Cultural Tourism, said in a statement.

“As the number of Cherokee speakers dwindled as a generation aged, his work served as a common thread celebrating and connecting our native speakers to each other, as well as speakers of new languages,” Shade said. -Lanier. “Like the language itself, Dennis represents a special connection to Cherokee culture.”

Sixkiller is the current host of “Cherokee Voices, Cherokee Sounds,” a weekly radio show that debuted in 2004, and features music, interviews, news, and more in the Cherokee language.

Sixkiller’s journey to lead the long-running radio show is explored in the exhibit, which also delves into his teaching and translation of the Cherokee language, his ministry, and his traditional Cherokee pastimes.

‘We The Peoples Before’ production at the Kennedy Center told stories of Indigenous resilience and strength
‘Dark Winds’ Hears the Critics: Director Says TV Series Will ‘Run Course’ for Accuracy
Assembly of First Nations to Host World Premiere of The Doctrine of Recovery
Vision Maker Media Grants Awards